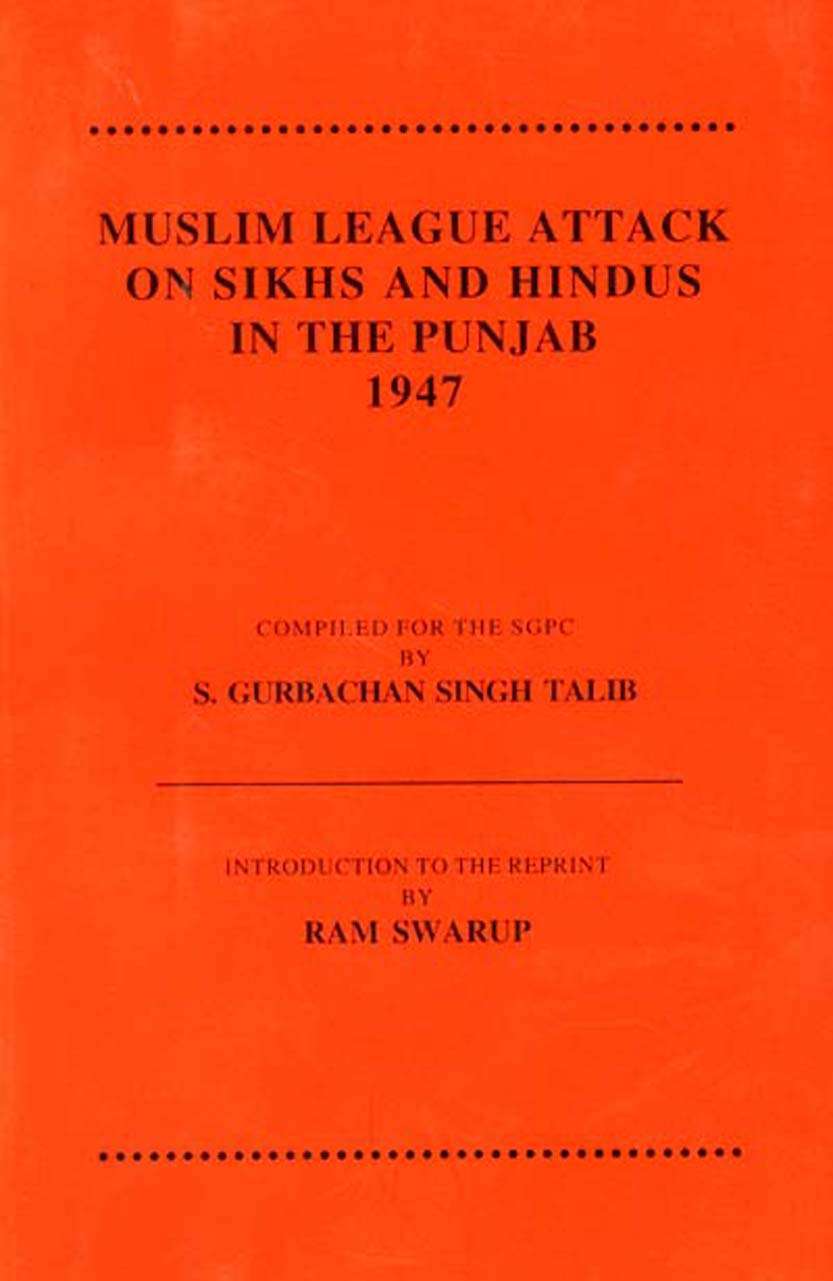 Muslim league attack on Sikhs and Hindus in the Punjab 1947, comp. for the SGPC by S. Gurbachan Singh Talib, introd. to the reprint by Ram Swarup

This volume is a reprint of an old book compiled in 1947 by Sardar Gurbachan Singh Talib, Principal of the Lyallpur Khalsa College, Jullundur, and published in 1950 by the Shiromani Gurdwara Parbandhak Committee. It records the story of 7-million Hindus and Sikhs who were uprooted from their homes in the West Punjab, the North-Western Frontier, Sind and parts of Kashmir, and the atrocities of this period-the carnage, killings, abductions and forced conversions that took place, forcing Hindus and Sikhs to leave their hearths and homes and start on the biggest mass migration of humanity, as the author describes it. Sardar Gurbachan Singh Talib mentions a broader dimension also and connects the events of the forties with the League politics and the League politics itself with the larger Muslim politics. He does not develop the point, but he does more than most other authors whose vision remains confined in the best of cases to the League's activities and who provide a narrow and even distorting framework. The fact is that League politics did not initiate Muslim politics but was itself a part of this larger Muslim politics; it was neither the latter's beginning nor its end but its continuation. Muslim politicians and scholars in Pakistan see it this way. Muslim politics, in turn, is grounded in Muslim theology. Islam believes in one God (their God) but two humanities: the believers and the infidels. Islam teaches Jihad or holy war against the infidels. It is not that the infidels have done any harm to Islam or Muslims but it is simply because holy war against the infidels is established as a divine ordinance, by the word of God, who has said in the Koran, `Slay the Infidels'. So the believers are at war with the infidels all the time, though, in practice, a war may not be possible at a particular time. For those who know this framework, the chapter of Muslim history which this book discusses is not new; to them it is an old chapter and also the one which has not yet closed, not even its carnage and exodus. Hindus have been subjected to these forces for centuries, and these forces continue to operate unabated even now. In this larger perspective, Pakistan itself is not a new phenomenon, nor does the story end with its creation, On the other hand, old politics continues under more unfavourable conditions for India. Pakistan is emerging as an important focal point of Islamic fundamentalism and it is seeking new alignments in the Middle East in conformity to its new role. While holding out the threat of nuclear blackmail, it is more than a willing ally of any country or group which has any quarrel with or grouse against India. In India itself, Pakistan enjoys a large support, not only among Muslims who have always had a soft corner for it and who, in fact, had an important role in its creation, but also among Hindu intelligensia, the country's left and secular elite who control its media and politics. India is being subjected to a war of subversion and aggression, a war hot and cold, active and passive. Pakistan has become an instigator and supplier, a trainer, an arsenal and a safe rear of many guerilla and militant forces. But Hindu India remains confused and even unconcerned. It has been a poor student of history; it has therefore also neglected its lessons; it has failed to read properly the forces, particularly ideological forces, that have been and are still at work to keep it down. In fact, it does not even acknowledge them. It sill stubbornly clings to its old assumption that the League politics came out of the scheming head of one Jinnah who was aided and abetted by the British, and that Muslims and Islam had nothing to do with it; that, in fact, they were reluctant victims of this politics and were pushed into it by an intransigent Hindudom. All this we believe partly because it involves doing nothing, anticipating nothing, planning nothing, and we can continue to live from day to day. A more realistic and faithful appraisal will impose on us duties of a different kind and scope, duties which we therefore shirk. We have learnt to live without thinking and we have not used to the idea of a shrunken and shrinking India. We can now think of India without Afghanistan, without the North-West Frontier Province, without Punjab and Sind, without East Bengal, and we can do the same without Kashmir and other parts in the future. Why assume avoidable responsibilities? Or perhaps the sickness is deeper. Long back, Sri Aurobindo saw the root cause of India's weakness, not in foreign yoke or poverty or dearth of spiritual experience, but in the decline of thinking power. Everywhere he saw inability or unwillingness to think, which is a sign of tragic decadence.;


We undertake to publish high quality research works on Buddhism and Hinduism from scholars around the world. We have been publishing the books under the renowned Satapitaka Series Read More...